The crust that surrounds rocky planets and enables the emergence of life took shape on Mars before what was thought, and at least 100 million years earlier than on Earth, researchers said on Wednesday (27/6). Analyzing grains from the mineral zirconium extracted from a Martian meteorite known as black Beauty, they determined that the outer layer of the red planet hardened 4.547 billion years ago, just 20 million years after the birth of the sun. Martin Bizzarro, a scientist at the center of Denmark for the formation of stars and Planestas, and author of a study published in the journal Nature, said:

The formation of the primordial crust of Mars – which is the final product of the formation of the planet – happened much faster than was thought. Our results indicate that Mars could have an environment with oceans and potentially life, long before Earth.

Water is considered an essential precursor to life, at least as we know it. 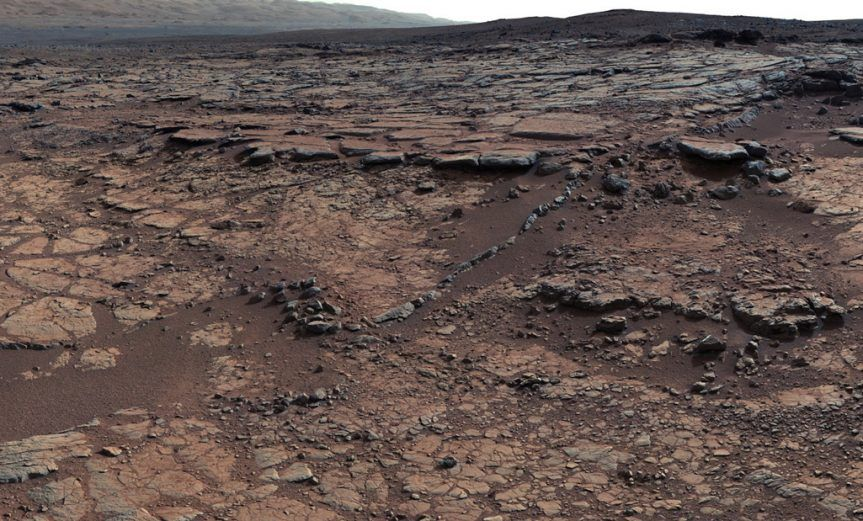 Mars was already much more like the earth, with a thick atmosphere, abundant water and global oceans. So far, mathematical models have suggested that the solidification of the Red Planet has taken up to 100 million years. The new study addresses the question by examining a piece of Mars that fell in the Sahara desert and was discovered in 2011. The Black Beauty meteorite weighed 320 grams when it was found. The researchers extracted 44 grams of the precious space rock and shredded five – enough to extract seven pieces of zircon that could be used in experiments.

By measuring the main decomposition of the uranium that had been trapped in zircon as molten magma from the hardened young Mars, scientists were able to accurately date the crust from which the zircon formed. Bizzarro said:

I'm glad we chose that strategy. ' The zircon is like a time capsule.

There are two main models for the formation of planets. In one, it occurs in stages, with small particles of dust clustering in ' planetesimals ' – Fragments of rock from 10 to 100 km in diameter that collide to form planetary embryos, and then over a time interval of 50 to 100 million years Planets. According to a newer model, planetary growth develops more rapidly and is fed by the so-called ' boulder accretion ', the accumulation of particle layers measured in centimeters and meters, which are weakly connected with gases. "Our data support newer models indicating the very rapid formation of terrestrial planets," the authors said. The new timeline suggests that something similar may have happened on our planet, but only after the earth was ' redefined ' by the giant impact that formed the moon 4.4 billion years ago, said Bizzarro. Mars is believed to have a dense metallic nucleus, with a radius of about 1,800 kilometers, consisting mainly of iron, nickel and sulfur. The nucleus is surrounded by a largely dormant mantle – about 1,500 km thick – mainly made of silicon, oxygen, iron and magnesium. Finally, the crust measures about 50 km deep, with a maximum thickness of about 125 km. The Earth's crust has an average of 40 km, but it is a third of the thickness of the Martian crust, since the size of the planet is taken into consideration. Source

Is there extraterrestrial life on Earth?
Meteor explodes over Russia
United Kingdom heads off and says they have released their last 3 UFO/UFO files. See why
Scientists discover Ocean ' ' 3 times larger than all of the surface ' ' below t...
Evidence of atomic wars on Earth has been mapped for thousands of years
Chile: Marine Divullga imprssionante image of Ufo. Sightings have become normal in Patagonia
We live in a virtual reality-physical explains why
Canadian astronaut reveals that humans could have gone to Mars in the years 60
We should take the UFO sightings seriously, says NASA physicist and researcher
Blood Moon, July 2018: Sign of the end of the world?
Astronaut Scott Kelly saw unexplained things in space
Strange UFO filmed in Bolivia supposedly came from the deep web