As we approached that corner, we saw the opening of the cave. And then I saw a lot of rocks that's another weird thing. And then bone scraps. I wasn't close enough to identify what kind of bones, but I saw what it knew to be a piece of our communication equipment. So, instantaneously, we think ' ambush ', maybe animal, you know, could be anything. There was enough room in front of the cave, but it had a steep fall; But there was enough room to get into a decent dispersal in case of an ambush.

Not long after they entered that dispersion formation, they saw something emerge from the cave that, despite their preparation, took them by surprise.

He was a man of at least 3.6, 4.5 feet high. This was a monster. Red beard, with long hair, passing by the shoulders, a scarlet red. And Dan ran into him and started shooting, which shook all of us in reality – because it was surreal. While Dan was moving towards him, another brother of mine started shooting. He skewered Dan – he caught him with this ' spear '. She passed him. He took Dan and he was coming for more.   We all just shot him. I don't know what it was, but I remember everyone scream, ' shoot him in the face, shoot him in the face! ' He was getting multiple shots, and he was still moving.

Finally, the giant was killed. Dan was also killed. And the patrol unit was immediately visited by a helicopter that dropped a cargo net. They were informed that they had to put the giant on the net, and soon after they had finished, a larger helicopter came, loosened a hook and the giant was loaded. 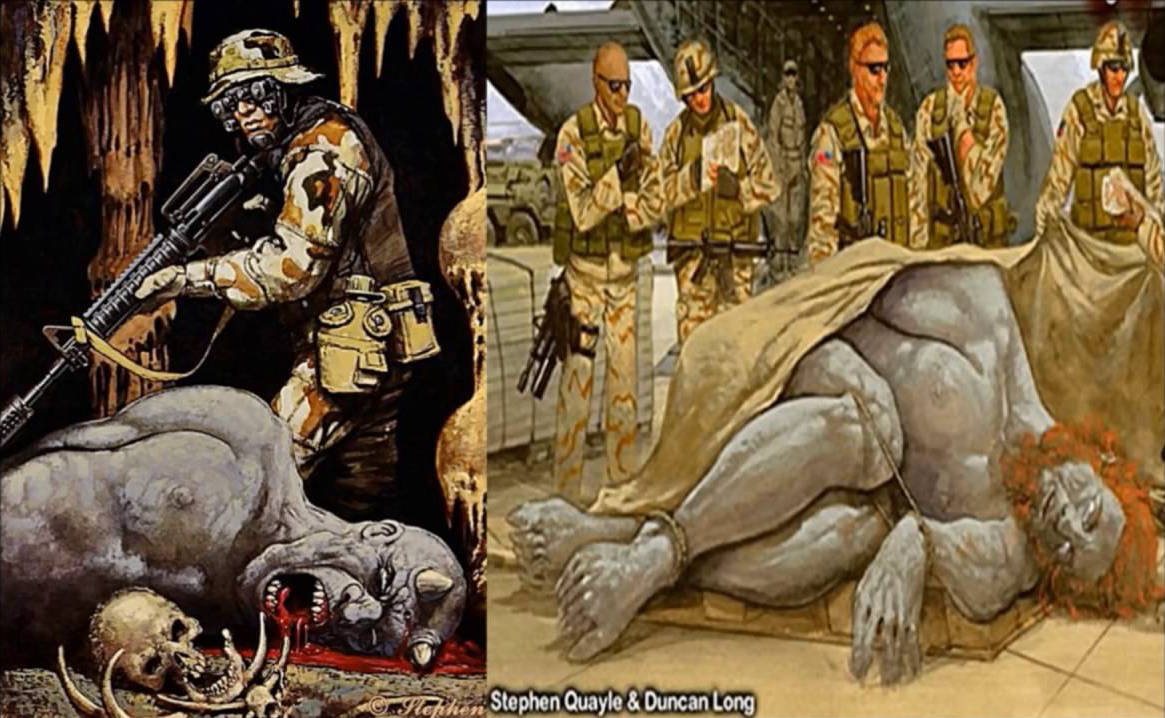 Although not an eyewitness, another special soldier from Afghanistan provides the following corroborative testimony:

We went back to the base and started listening to this rumor about a unit that killed it, which they started calling a really tall person. At first I didn't think about any of this, so I found out that the person they killed had actually three times the size of a man, had extra digits on his hands and feet, and had red hair, and a special unit had come in and wanted that target. Well, we heard that they killed this thing inside a cave, or at the entrance of a cave, and it was common knowledge among the military. When you hear for the first time, you're thinking, this has to be a joke. This has got to be a hoax. So, after things settle in a certain way, and you keep listening, you start to realize it's not a joke. They kept telling us to keep our guns pointed up, which usually means they're two in the chest, one in the head, but they kept telling us to point them at a man's head and higher up. So, we questioned, why did they want us to shoot higher than a man's head?

These testimonials are found in the video below, of interviews conducted by L. A. Marzulli with the two soldiers who wanted to remain anonymous. In addition, there are some filming of the coast to coast with presenter George Noory, presenting a pilot who saw and actually transported the giant.

This pilot landed on a base in Afghanistan and was informed that they needed to pick up a special charge and that cameras were absolutely not allowed. The pilot describes the ' load ':

It was basically a dead guy, and this guy was extremely big, and when I say big, our pallets are basically, if I remember correctly, about 2.70 by 3.65 feet, or more, and this guy was lying in a fetal position on the pallet, and he filled the pallet. He was around about 500 pounds.

The pilot corroborated much more details given by the other two witnesses, including the fact that this giant was light-skinned, red-haired and had extra fingers on his hands and feet.

As impressive as these three separate testimonies are, there is, in fact, a much broader corroboration about the existence of red-haired giants and light-skinned, with six fingers and feet, and double rows of teeth. Certainly in Afghanistan, the stories among the natives are rampant about the existence of giant cannibals living in caves. The soldiers who understood the language of the natives tended to refer to these stories as ' legends ', although some noticed that the presence of bones near the entrances of the caves suggested that humans were killed and devoured by something that lived in the cave, either by Ambush or, according to the natives, by sacrifices they offered to the giant. There is much evidence that a cannibal and redheaded race of giants once dwelt in North America, and threatened several native tribes whose folklore and legends (or for Tribes, history) report things similar to those mentioned in this article:

After years of struggles and numerous casualties on both sides, the natives decided to end this gigantic threat by joining under a single flag. It wasn't long before the redheaded giants were crippled and forced out of their homes. The Giants retreated into a cave, but were traced by the natives, and with a desire to avenge their fallen brethren, they set a huge fire that burned and intoxicated everyone. Those who ventured out, to try to escape, were received with retribution to the extreme.

In reference to the redheaded giants, there is a discussion between David Wilcock and Corey Goode, where they say that these giants were found in stasis, which means in suspended animation, until the time they should return. More than one person within the UFO community witnessed these red-headed giants being found in chambers of the remains, in full battle insignia and other adornments, seemingly in preparation to resume their role on Earth at the right time.

By asking one of the U.S. Army witnesses why this information was being kept secret from the rest of the world, he said:

My personal opinion is, if it points to the Bible as being accurate, they don't want it. If it's against Darwinian evolution, it's not to be talked about.

It seems that those who are in power are trying everything to prevent everyone from discovering that human history is very different from the NEODARWINISTA model in which human evolution has been a random, slow and uninterrupted pattern, without the intervention of any other Sentient species. It is probable that the knowledge of the existence of only a different species here on earth would completely break the spell, and that most of us demanded the truth about our history and our place in this universe, along with other intelligent species. Of course attempts by the institution to destroy the credibility of this kind of story begins at the top – more precisely at the top of a Google search,. A survey on ' Kandahar Giant ' predictably has this article from the site Snopes at the top of the list, to tell us, of course, that the whole story is false. The proof?

A spokesman for the Department of Defense told us that they have no record of such an incident: "We have no record or information about a special forces member killed by a giant in Kandahar."

If you've come this far in the article, I doubt this ' proof ' is very convincing to you. Source

Geologists on alert: Geyser in Yellowstone Park erupt again
Gigantic discovery star can compel us to review the whole history of the universe
Scientists detect planet nine in our solar system
Scientists discover Ocean ' ' 3 times larger than all of the surface ' ' below t...
We live in a virtual reality-physical explains why
Beautiful Crescent moon meets Venus, Mercury and Regulus tonight
Chile: Marine Divullga imprssionante image of Ufo. Sightings have become normal in Patagonia
The crust of Mars stiffened quickly, increasing the possibility of life
Something exploded in space and scientists don't know what it was
Meteor explodes over Russia
Sky turns red as blood in the Middle East, awakening fears of the apocalypse
We should take the UFO sightings seriously, says NASA physicist and researcher