Suspended dramatically and brilliantly in the West during the night of Sunday, July 15th, will be a brilliant "star" and the Lunar Crescent: a meeting of Venus and the moon at dusk and early evening. The cosmic couple will be very attractive if the sky where you are clean. Also, look carefully at the lower left corner of the pair and you will see the star Regulus shine away, it is the main (Alpha) star of the constellation of the lion, and. You can also take the planet Mércurio much more to the left.   The Moon and Venus will have a beautiful conjunction on Sunday, July 15th, with the company of Regulus and Mercury. Look at them west, towards the sunset as twilight fades. The best visualization will probably be about 40 to 60 minutes after the local sunset time. Hunt by the bright pair very early, and the sky will still be too bright to display them well. Look too late, and they'll be sinking a lot on the horizon on their way out of the picture. 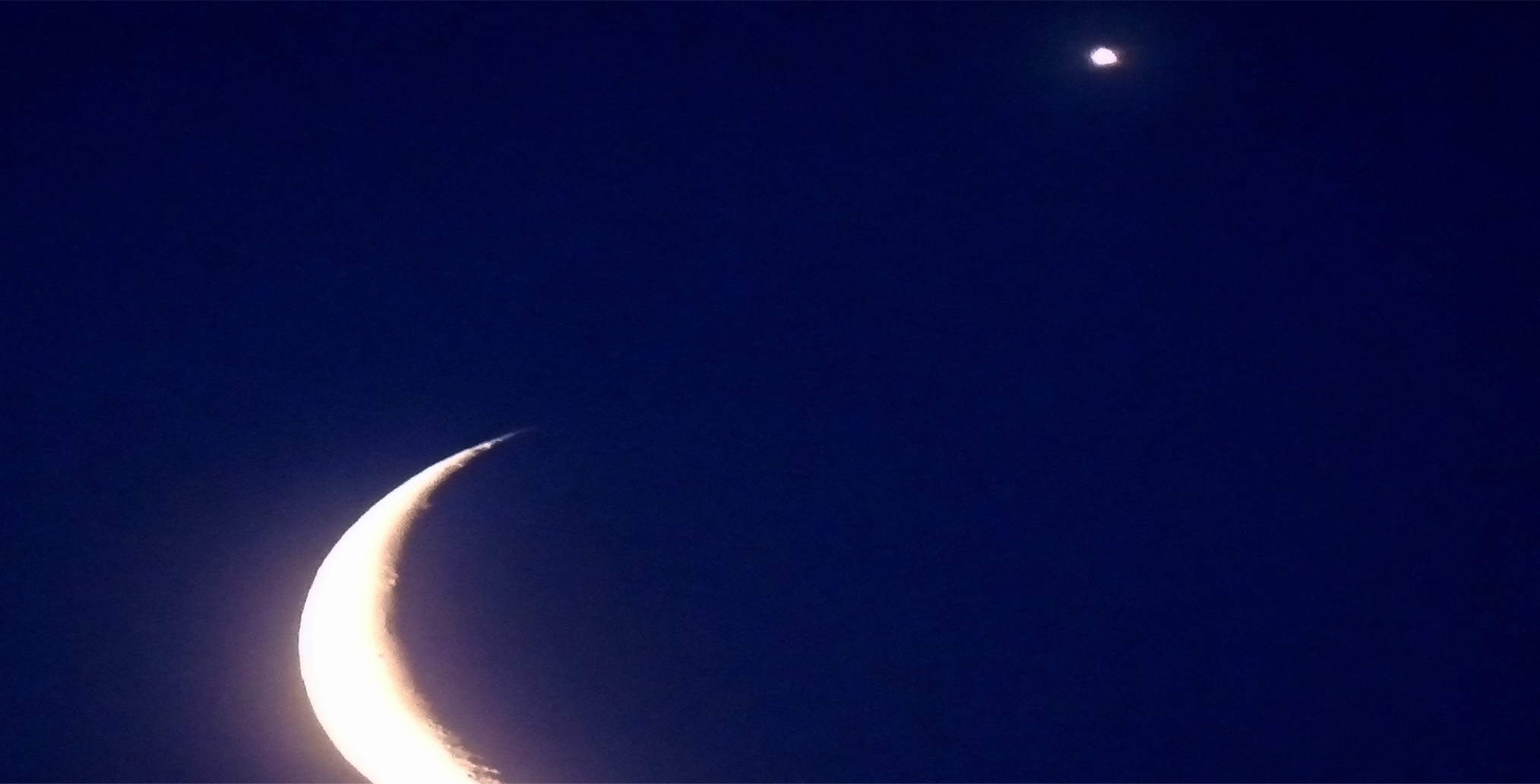 Also, look carefully at the lower right corner of the pair and you will see the star Regulus shine away, it is the main (Alpha) star of the constellation of the lion. She'll be a little under 1% as bright as Venus. 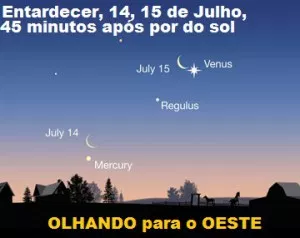 In addition, you can also take the planet Mercury much more to the right. A line of Venus through Regulus points directly to the planet Messenger of the gods. Binoculars will help. (All descriptions are for spectators in North America.) How close the Moon and Venus really will appear depends on where you are. Seen at dusk in the Eastern time zone, they will appear separated by about 2 ° – twice the width of your finger to the length of the arm. Seen from the west, they will be less than a finger away – just ½ °! Inside the sun-lit Crescent, you can notice the rest of the moon glowing vaguely. What you're seeing is called Earthshine. It is the reflection of the Earth's brightness on the lunar surface illuminating the nocturnal lunar landscape – just as the full moon illuminates nightly landscapes on earth. If you have a telescope, this is a good time to get you out of the closet. In addition to features on the moon, it will show that Venus has a tiny and dazzling Giboso disc – demonstrating that this planet has its own phases similar to the moon. The Moon-Venus pairs are not unusual, but this one is more dramatic than most. Whenever Venus shines in the twilight sky, as it has been since the end of winter (summer in the southern hemisphere), the crescent moon passes once a month – though usually not so closely. For example, they will appear much further in the upcoming encounters, on August 13th and September 11th (again in North America), and are also closer to the horizon.

The Glory of a moon-Venus pairing is that these are the two brightest astronomical objects in our night sky after the sun. The moon looks bright because it is so close to us: about 240,000 miles (average), the moon is 100 times closer to us than the planet Venus has already arrived from Earth. "The nearest planet" usually means Venus, which is closer to us as a planet and also close to the sun, so it is very illuminated. And it's covered with highly reflective white clouds. "Meeting", however, is always a relative thing in astronomy. Venus and the moon may look like charming companions on Sunday night, but Venus, which is 88 million miles away from Earth, will be 380 times farther from us.

We should take the UFO sightings seriously, says NASA physicist and researcher
Evidence of atomic wars on Earth has been mapped for thousands of years
Gigantic discovery star can compel us to review the whole history of the universe
Strange UFO filmed in Bolivia supposedly came from the deep web
Israel will launch its first ship to the moon
Astronaut Scott Kelly saw unexplained things in space
Canadian astronaut reveals that humans could have gone to Mars in the years 60
United Kingdom heads off and says they have released their last 3 UFO/UFO files. See why
Something exploded in space and scientists don't know what it was
Scientists detect planet nine in our solar system
History confirms encounters between real giants and explorers
Geologists on alert: Geyser in Yellowstone Park erupt again