Get ready for a cosmic spectacle! Stellar collisions are one of the most amazing things we can imagine. But unfortunately, according to the best estimates, such events only happen on average once every 10,000 years, considering only our galaxy. Recently, thanks to the improvement of instruments and technology, astronomers have been able to observe some mergers in progress. But so far, no one has been able to witness the phenomenon in action from the beginning. The good part of this story is that it's about to change! According to studies done by a team of researchers at Calvin College in Michigan, USA, a binary star system will probably merge and explode in 2022. This is a historical discovery, as it will allow astronomers to observe stellar fusion and the explosion for the first time in history! And for everything to get even more exciting, the researchers claim that this explosion will be visible to the naked eye, from here on earth! The results were presented at the 229 meeting of the American Astronomical Society (AAS). In a presentation entitled "A precise prediction of a stellar fusion and new red explosion," Professor Lawrence Molnar and his team shared the discoveries that indicate how this binary system will merge into 2022. This event, according to them, will not only be visible to the naked eye, but also become the brightest object of the night sky! This binary star system, known as KIC 9832227, is being monitored since 2013 by Professor Molnar and his colleagues, students from several universities.

Artistic illustration created by Professor Molnar and his colleagues shows the
Binary system of Stars KIC 9832227, and how the contact occurs between their atmospheres.
Credits: calvin.edu

At first, it was not known for sure whether the KIC 9832227 system was a pulsar or a pair of stars, but after several observations, Professor Molnar and his colleagues concluded that it was even a pair of stars of the "binary contact" type (a class where the two star s are close enough to share an atmosphere). The same situation occurred in the past with another binary system called V1309 Scorpii, which also had shared atmosphere and suddenly, in 2008, the stars collided and exploded. Believing that the KIC 9832227 system had a similar destiny, the researchers performed several observational tests to understand the behavior of the stars. After measuring the orbital period and observing them through spectrometers, it was concluded that the stars are in fact about to explode in a strong collision, resulting in a stellar explosion known as the "New Red". Initially, in 2015, the explosion was estimated to happen between 2018 and 2020, but after analyzing the data better, the researchers determined that the explosion should take place in 2022. The explosion, as previously said, may be seen with the naked eye, and must become the brightest object in the night sky. These binary systems are found in the constellation Cygnus, as shown in the image below: 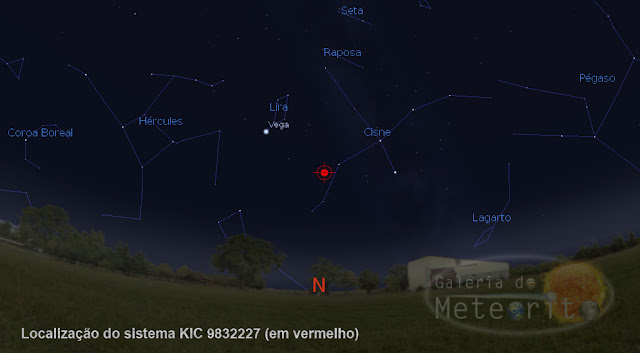 Location of the KIC 9832227 system in the constellation Cygnus.
Credits: STELLARIUM/Meteorite Gallery

As we can see from the image above, the constellation of Cygnus is very close to the North horizon, which hinders its observation in the southern hemisphere, especially if the observer does not have access to a free horizon, without buildings, trees, etc… Another factor is that for us, in the southern hemisphere, this constellation is not visible during the summer months. Therefore, we must hope that this stellar collision occurs preferentially during the winter. Observers located in the north and northeast of Brazil have a privileged view of this region of the sky, as it gains a better height in the firmament. A collision to remember this is an incredible find! No astronomer has been able to predict with such precision when and where a stellar collision would take place. This is the first time, and everything has been discovered by teachers and students! "Most major scientific projects are made in huge groups with thousands of people and billions of dollars. This project is exactly the opposite. It was done using a small telescope, with a teacher and some students looking for something unlikely, "explains Professor Molnar. "No one has ever predicted an explosion before. Why pay someone to do something that almost certainly would not succeed? It's a high-risk proposition. But in Calvin it's just my risk, and I can use my work on interesting and open issues to bring extra excitement to my classroom. Some projects still have an advantage when you don't have as much time or money. " 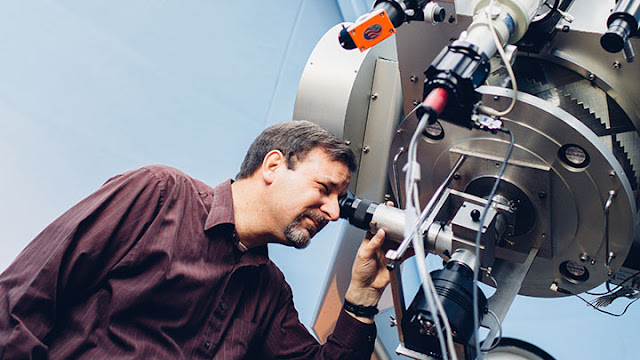 Professor Lawrence Molnar of the Department of Physics and Astronomy at Calvin College.
He predicted that the binary system of stars KIC 9832227 will collide in 2022.
Credits: calvin.edu

Over the next year, Molnar and his colleagues will be monitoring KIC 9832227 carefully, and at multiple wavelengths. This will be done with the help of the Very Large Array Observatories (VLA), NASA's Infrared telescope facility at Mauna Kea, and the ESA XMM-Newton probe. These observatories will study the star Radio spectrum, infrared and X-ray emissions, respectively. Molnar also expects amateur astronomers to be able to monitor the pair's orbital timing and brightness variations. And if Molnar and the forecasts of your team are correct, every student and enthusiast (not to mention the people who are walking the night, looking at the sky) will have a wonderful cosmic spectacle to observe! It will be an unforgettable event. An interesting fact is that this historical discovery will also be the subject of a documentary, entitled "Luminous". It will be directed by Sam Smartt, a professor at Calvin College, and narrate the process that led Professor Molnar and his team to accomplish this unprecedented discovery. The documentary will also include the images of the new red explosion. But as it will only happen in 2022, it should be released at some point in 2023. What's up, huh? Were you anxious?!