In the words of Seth Shostak, a senior astronomer at the SETI Institute in Mountain View, California, a typical Hollywood alien is "soft, spongy and very mucous."  These pieces of snot from the sci-fi movies are inclined to abduct us, introduce us probes, hover over us and even walk among us (disguised, logical).  But far beyond the limited scope of Hollywood, aliens can exist.  What do they look like and how do they really face a meeting with humans? Astrobiologists deduced some answers, through the combination of their knowledge of life on Earth, and with their understanding of the cosmos as a whole.  The profile they traced from the ETs may not be what you expect. 1. They don't come in peace the renowned physicist Stephen Hawking once warned that humanity's efforts to communicate radio with extraterrestrials could be putting us in jeopardy.  If the aliens detect our signals, then they are technologically capable of coming here – proof that they are much more advanced than we are – "I think the result would look like when Christopher Columbus arrived in America, which was not very good p Ara the Native Americans, "said Hawking. But how could we know if the aliens are evil or the opposite?  Shostak said we don't need to look far beyond the Earth.  Aggression has evolved as a characteristic of earthlings because it helps us to obtain and maintain our resources.  Although the aliens would have emerged and evolved under totally different conditions, the pressures to secure finite resources would probably have shaped their behaviors as well.  "I suspect the resources would be finite in every corner of the universe," Shostak said to the lifes ' Little mysteries. 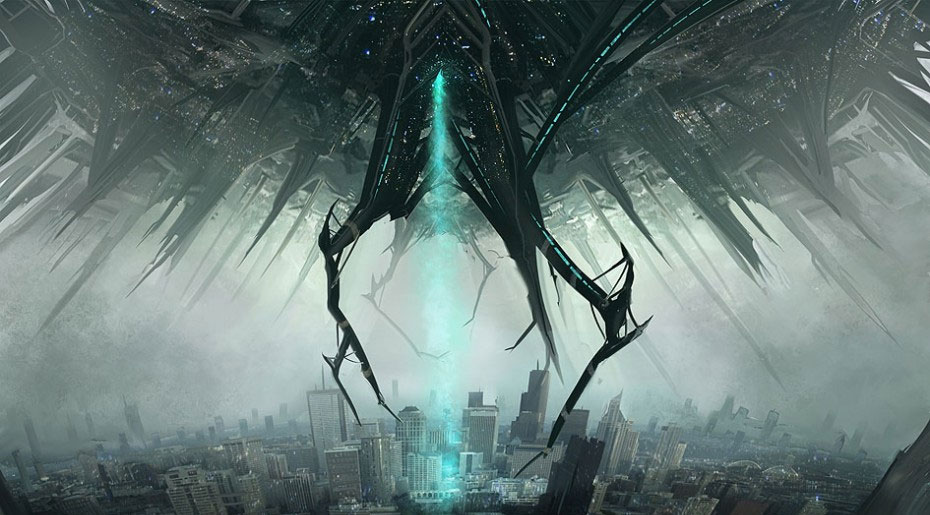 2. They have not put us here a common eccentric theory is that humans are a gift to the Earth.  Some people say we were placed here during a passage near an inhabited planet called Nibiru.  It is claimed that this planet, which was never actually observed by astronomers, would be at the edge of our solar system and would enter it from time to time. "I get e-mails every week saying that Homo sapiens is the result of alien intervention," Shostak said.  "I'm not sure why the aliens are interested in producing us.  I think people like to think we're special.  But isn't that what left Galileo and Copernicus in trouble – to question how special we were?  But if we're just another duck on the road, it wouldn't be very exciting. " 3. They are immune to the Earth's bacteria the alien visitors to Earth are occasionally shown in science fiction as having been defeated by their own alien nature.  Without immunity to Earth's bacteria, they all die of infections.  This really wasn't going to happen.  "Alien life forms would not come here only to be eliminated by our bacteria, unless they were biochemically related to humans," said Shostak.  "To be dangerous to them, bacteria would have to be able to interact with their biochemistry, and their ability to do that is far from certain." 4. They will not eat us as well as they would not be recognized by local pathogens as a potential host, the aliens also would not recognize the organic matter of the Earth as a source of potential food.  They couldn't digest us.  And anyway, they probably wouldn't have to do that.  As Jacob Haqq-Misra, an astronomer at the State University of Pennsylvania, said, "a society capable of interstellar travel should have already solved its development issues, thus not needing humans for its food." 5. They will not mate with us human DNA doesn't match XYZ, or whatever it is that encodes alien life.  "The idea that they are coming for the purpose of procreating is associated with the wishes of community members who do not have a good social life," said Shostak.  "Think about how well we breed with other species on earth, and they have DNA.  It would be like trying to cross an oak tree. "– Natalie Wolchover

Source: huffingtonpost.com Although we must respect the declarations of scientists, as they devote their lives to the study of the unknown (in a way), we do not have to blindly accept all their conceptions, for even the men of science are fallible and this has been Tasted practically every day.: 1. They can yes come in peace, or not for this item, Shostak suspects that the resources are finite throughout the universe and that "aggression has evolved as a characteristic of earthlings because it helps us to obtain and maintain our resources".  The article goes beyond saying that "although the aliens would have emerged and evolved under totally different conditions, the pressures to secure finite resources would probably have shaped their behaviors as well." Now, the word evolution has been used in the above allegations.  So, even if the resources were finite in the universe (which they don't seem to be), would it be so absurd to say that an extraterrestrial race could evolve to the point of losing the need to maintain its ' mechanism of aggression '?  If there is evolution (and evolution means change of characteristic, usually moved to improvement), then it can change everything drastically, to the point of eliminating mechanisms and feelings no longer needed, can not? Of the tens of billions, or who knows more, of civilizations existing throughout the universe (and this is a finding based on probability), there may be all kinds of behavior, with many of these behaviors even unimaginable to us humans. So the answer to this question, on my part, is: Yes and no, because the variables can be much greater than any human being can imagine. 2. There is the possibility that they have put us here, but there is no concrete evidence it would be a waste of time to discuss this point, because no one can prove it in one way or another.  Against science, there is the question of ' missing link ', among other factors, and against those who believe in the theory that we have been deployed on Earth, there is the question of lack of concrete evidence, beyond speculation. And, contrary to what Shostak imagine, to think that we were created by a race of ETs does not put us in the position of being ' special ', but rather the opposite of that. 3. They may well be immune to the bacteria of the Earth, but not only for the reason quoted by Shostak when we talk about alien civilizations, we are talking about something that we cannot assert absolutely anything for sure. So it's very plausible that there are extraterrestrials in the universe that have a biochemistry totally incompatible with ours.  In this way, as quoted in the above article, the chances of them getting infected would be even minimal. But on the other hand, who can say categorically that many of these races are not compatible with US biochemically? Who can say for certain that the biochemistry of the Earth is not possible on other planets? However, even if that is the case, my suspicion is that if they acquired such advanced technology to cross space, from one solar system to another, then I bet they could also develop their medicine to the point of being immune to any bacteria or Virus, either through a ' universal vaccine ', either through genetic mutations. You missed Shostak use a little more of your imagination. Probably, considering the diversity that may exist in the universe, I must also have failed mine and there may be a range of other possibilities for technologically evolved ETs to be immune to our diseases. 4. They're not going to eat us anyway! And that's final. Here's another point that's not worth discussing.  It's absurd.  But anyway, in my opinion, Shostak is right about the fact that they don't come to eat us, but he just thinks that there's only the possibility that they're so different from us that we'd be incompatible. So I fully agree with the statements of Jacob Haqq-Misra: "A society capable of interstellar travel should have already solved its development issues, thus not needing humans for its food."  And this is a position I have already indicated in the above paragraphs and that to me makes all the sense of the world… or rather saying, of the universe. 5. Because of the diversity that possibly exists in the universe, some of them could yes mate with us, if they want in the article above, again Shostak enters the syndrome of ' 8 or 80 ', forgetting that there are dozens of numbers between the two digits. And that position taken by Shostak is a bit strange for a man of science, I think. Now, regrettably even it is Shostak to have despised, and even insulted, people who consider this possibility, saying that the "idea that they are coming for the purpose of procreating is associated with the wishes of community members who do not possess a Good social life. " This even took away my inspiration to continue writing about Shostak.  It's not worth it.

The following article, by Natalie Wolchover, was published on July 14, 2012 and updated on February 12, 2013 on the site huffingtonpost.com.

The scale of the river to determine the importance of a possible alien signal
Intelligent dinosaurs came out of the Earth millions of years ago
Scientists have discovered how and when the sun will die, and it will be something epic!
The curious case of the immortal Putin
The Enigma of the planet Nine, the new member of the Solar system that no one has ever seen
Brazilian physicists reveal new discernments about force that pushes and repels objects
Archons: The "extraterrestrial" race that dominates the earth, according to ancient texts
Trump talks openly about creating space force: Is the disclosure of the secret space program near?
Astronomers discover 12 new moons of Jupiter
Trump wants NASA to search for aliens – funding needs to be approved in Congress
Tapestry of the Middle Ages can help discover the planet Nine
The largest amount of water in the solar system is not on Earth