The geyser Steamboat in Yellowstone National Park erupted for the eleventh time in 2018 on Friday, July 6, 2018 at 13h37, and the eruption lasted 32 minutes.

Steam phase of a large eruption of the Steamboat Geyser May 13, 2018. Via Forbes

The US Geology Service (English acronym, USGS) said that the geyser decided to follow a semi pattern of eruption every 6-8 days in the last two months; However, it was 20 days 20 hours and 42 minutes since the last eruption on June 15th. 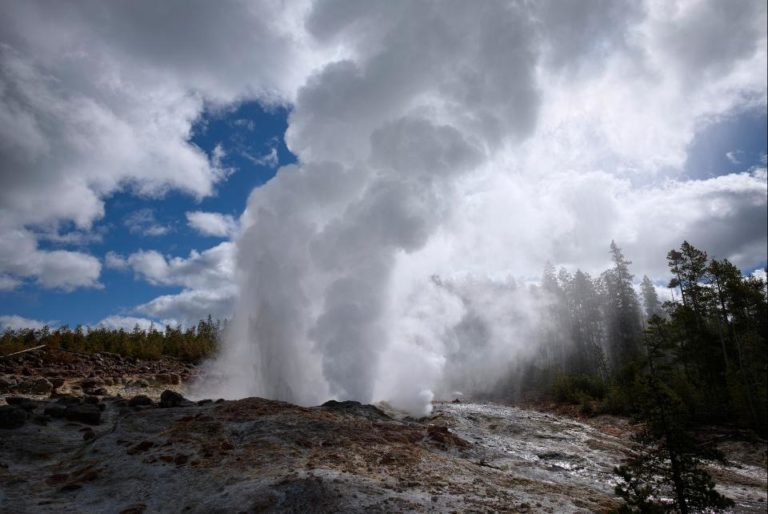 List of the 11 eruptions of the Steamboat geyser in Yellowstone National Park in 2018. Via Geyser Times

The largest geyser in Yellowstone National Park, Steamboat, is leaving the scientists perplexed, after it erupts for the eleventh time since March 2018. The Steamboat Geyser, unlike the regular Old Faithful, erupts very rarely. Before this eruptive swarm, the Steamboat had its last eruption in 2014. Scientists are not sure why, all of a sudden, the geyser is going through a series of eruptions, something that happened in the past, but not for decades.

How the geysers work. Via Shuttershock. Via Forbes

The Steamboat is a larger and more powerful version of Old Faithful, throwing boiling water at up to 105 feet in the air. According to the USGS, it appears that there is an approximate frequency of eruptions every 7 to 8 days. To study the geyser, geologists at the University of Utah set up seismic clusters throughout the geyser to capture the crash during the eruptions. His hope is to rebuild the geyser's "plumbing" by measuring the sound waves as they travel through the geyser through the seismic sensors. Although geyser eruptions can be dangerous if they are very close, they do not present a risk of a larger eruption of the Yellowstone supervolcano. The eruptions of geysers are a normal and regular part of the Yellowstone volcanic system. But, as has been explained, Steamboat's behavior is more than suspicious. Source

American soldier claims to have killed giant in Afghanistan
Astronaut Scott Kelly saw unexplained things in space
Israel will launch its first ship to the moon
Human genetic code was created by ancient aliens and signed with the number 37
Laser signals are detected in the Nebula Center
Scientists detect planet nine in our solar system
Huge furry carcass appears on beach of the Philippines
Seismic swarm in the Canary Islands can cause tsunami in Brazil?
Beautiful Crescent moon meets Venus, Mercury and Regulus tonight
UFOs, meditation and an emerging world
We should take the UFO sightings seriously, says NASA physicist and researcher
Something exploded in space and scientists don't know what it was