How would humanity react if we actually found aliens?

The article shown below, "How would humanity React If we really Found aliens?" (How would humanity react if we actually found aliens?), recently published by the site Space.com, rather than focusing its majority on the reaction of humanity if we were officially contacted by ETs, focuses more on community efforts Scientific prevalent to contact intelligent alien life. Even so, it is interesting to know what these initiatives are.

An interesting point is that although the scientific community does not believe in flying saucers. The illustrative figure they used for the article shows four of these ships.

If the aliens came in contact with us, what would happen first?

This is an issue that has intrigued science fiction fans and scientists for decades, and we can already get a hint of how people will react. On October 30, 1938, a dramatized version of H.G. Wells ' 1898 novel, ' The War of the Worlds ', was broadcast on the CBS radio system in the United States. The story details how the Martians attacked the Earth.

The radio transmission caused a reaction when people confused her with a real radio report, but the reports vary as to the reaction that happened. Some reports describe panic throughout the country, while others say that few people have actually heard the broadcast. The promise of alien life is shown in episode 1 of ' AMC Visionaries: James Cameron's story of science Fiction (the history of science fiction by James Cameron), which debuts on the AMC Channel tonight (30/4 in the USA). Still, Duncan Forgan, researcher of search for Extraterrestrial intelligence – SETI (search for Extraterrestrial Intelligence), told Space.com that the transmission of the ' War of the worlds ' can be instructive to think like the scientists of SETI throughout the World update their ' first contact ' protocols.

If the researchers find a signal today, said Forgan, one of the things they will have to administer is a public accustomed to constant updates of news on Twitter and other forms of social networking. It's something Forgan and his colleagues are already working on. The SETI Permanent Committee of the International Astro Academy created a Pós-detecção protocol in 1989, which was slightly updated in 2010; A new update will begin soon and should end in a few years, said Forgan

For the most part, scientists assume that alien contact would happen by means of a signal sent to Earth on purpose. The ' Acid test ' is to ensure that the signal is verified by multiple observatories, said the senior astronomer of the SETI Institute, Seth Shostak. "It would take a while to check, and then people who like to think about these matters say that you would have a press conference and announce it to the world," he said, but added that this would not work unless everyone in the project swore secrecy . In this time of news leaks, he said the situation is very unlikely to be kept secret.

So scientists try to stick to a protocol that includes informing the public. The IAA protocol of 2010 has only two pages and covers aspects such as the demand for a signal, the treatment of evidence and what to do in the event of a confirmed detection.

When the evidence reaches the public while scientists are still analyzing the signal, Forgan said he could manage the public's expectations by using something called the river Scale. It is essentially a numerical value that represents the degree of probability that an alien contact is ' real '. (Forgan added that the river scale is also going through an update, and more should be released in May.)

If the aliens arrived here, the ' first contact ' protocols would probably be useless, because if they were smart enough to physically appear, they could probably do anything else they wanted, according to Shostak . "Personally, I'd get out of town," joked Shostak. "I'd take a rocket and get out of the way. I have no idea what they're doing here. "

But there's little need to worry. An ' Independence Day ' scenario of aliens exploding important buildings like the White House is extremely unlikely, Forgan said, because interstellar travel is difficult. (This feeds something called the Drake equation, which considers where the aliens might be and helps to show why we haven't heard anything from them.) 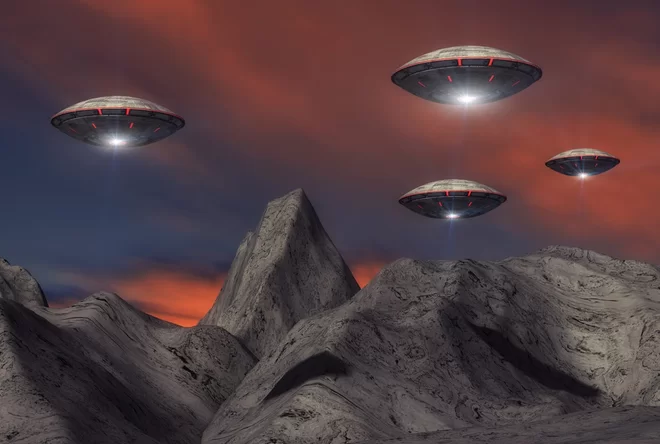 SETI work in its early days

To find a signal, first we have to be listening. The ' Listen ' SETI is happening all over the world and, in fact, this has been going on for many decades. The first modern SETI experiment occurred in 1960. Under the Ozma project, Cornell University astronomer Frank Drake pointed out a radio telescope (located in Green Bank, West Virginia) in two stars called Tau Ceti and Epsilon Eridani. He scanned at a frequency that astronomers dubbed ' the Water Hole ', which is close to the frequency of light emitted by hydrogen and hydroxyl (a hydrogen atom attached to an oxygen atom).

In 1977, the Ohio State University SETI program made international headlines after a project volunteer, Jerry Ehman, wrote, ' Wow! ' next to a strong signal that a telescope received. The ' Wow ' sign of August 15, 1977, however, has never been repeated.

There have been many, many projects since. As a sample: The SETI Institute was founded in 1984; While it may be the most famous of SETI's projects, there are many other independent setis in universities and institutions around the world that have done the work over the decades. One of the main initiatives of the Centre was the Phoenix Project, which scanned the stars near the Sun. Currently, the SETI Institute, in collaboration with other institutes, is working on a concept called the Allen telescope Array, which has dozens of radios in Northern California.

In 2015, the well-known physicist Stephen Hawking and many other researchers launched the Breakthrough Listen, a project that will examine 1 million of stars of the Milky Way and 100 nearby galaxies of extraterrestrial life.

Although the search for alien messages is not underway in space, there have been efforts to communicate with any beings that might come across our spacecraft.

The Pioneer 10 and 11 probes flew by Jupiter (and in the case of Pioneer 11, Saturn) to finally get out of the solar system. Prior to its releases on 1972 and 1973, respectively, a Pioneer plate was assembled on board each spacecraft. It shows the shape of the human body and where the Earth is located in the Galaxy.

The two Voyager probes were launched in 1977 to examine the external solar system. Voyager 2 has reached interstellar space in 2012, while Voyager 1 is still at the edge of the solar system. Each of the spacecraft includes two gold discs with sounds recorded on earth, ranging from whale calls to music, to the word ' hello ' in many languages. The record also has diagrams of the human body and where our solar system is located.

Scientists also transmitted a radio message from the Arecibo observatory in Puerto Rico in 1974. The so-called Arecibo message includes things like the numbers from 1 to 10; The atomic number of elements such as hydrogen and oxygen; DNA information; and diagrams of a human body, the earth and our solar system. In a related field, the study of exoplanets accelerated in recent years with the Kepler mission, which found more than 2,000 exoplanets confirmed in isolation, as well as other observatories in the ground and in space. Scientists are now trying to characterize which of these planets can be the most livable. Atmospheric studies and more detailed visions of the activity of the stars will be some of the activities that scientists will perform with future telescopes, such as the James Webb Space Telescope, which is to be launched in 2020.