Wa Tiba, 54 years old, left home during the night on 14 June, armed with a machete and flashlight. She went to check if boars were attacking her cornfield, but never came back. His family and friends went out to look for her, and the next day they found only their sandals and machete. At 50 meters of the objects was a seven-metre python with a volume in his stomach. The group killed the Cobra immediately and carried it back to the village. "When they cut the belly of the snake, they found the body of Tiba still intact, with the clothes and everything. She was swallowed from the head, "reported the village Chege, Faris. Wireframe Pythons Hunt When choosing an area that has the scent of prey. Then they wait for the prey to appear before it bites and curls around it. Contrary to what many people imagine, it does not kill the animal by suffocation, but by cardiac arrest in preventing the circulation of blood. This death happens in a few seconds, as opposed to a suffocation, which takes up to five minutes to kill the victim. 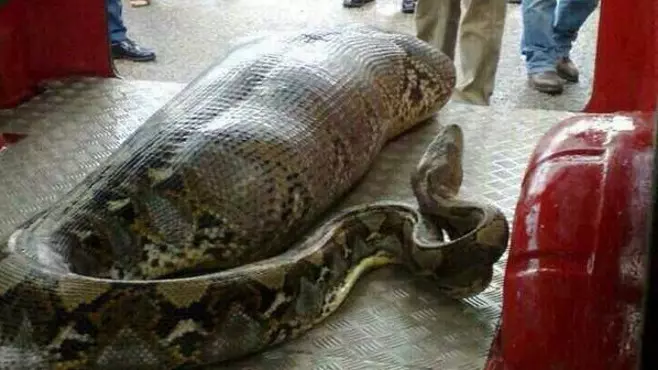 The python's greatest difficulty is to swallow a human being, on account of the square shoulders we have. Pigs and monkeys are easier to swallow because they get wider in a gradual way, and not suddenly like us. That's why this kind of snake doesn't usually attack adult humans. Another recent case involving an adult took place in March 2017, also in Indonesia, when a 25-year-old palm oil collector disappeared and was found in the belly of a python-reticulate. But how often exactly does that kind of death happen in the whole world? "It's incredibly rare in natural environments," says David penning. "It's probably rarer than accidents with people who have pythons and good ones at home and don't follow the safety recommendations." In 1976, 120 people from Indonesia were interviewed about attacks of this type of snake. The study was published in the revised Proceedings of the National Academy of Sciences, and it was found that only six people died from Python attacks between 1934 and 1973. It is likely that the number of encounters with this giant snake will increase as its habitat is increasingly overrun by humans. [Live Science]