Have you ever encountered these images before? It is not the first time that a conspiracy theory claims that a world leader is a time traveler or immortal. This time it seems that the Internet took a particular interest in Russian President Vladimir Putin, which some claim to be the traveler of the final time. This time, people saw a strange resemblance between Vladimir Putin, president of Russia, and two historical photographs made in 1920 and 1941, respectively. Conspiracy theorists claim that images are the definitive proof of time travel or immortality.

Startling allegations made on social networks suggest that the two historical images made in 1920 and 1941 are, in fact, Russian President Vladimir Putin. The photos, alleging conspiracy theorists, are evidence of a slightly younger version of Putin, who is 65 years old. 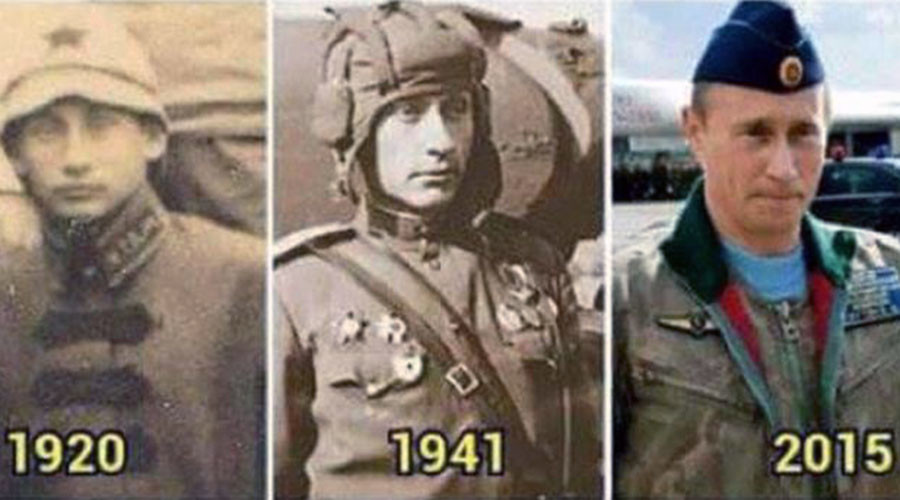 It is believed that the image of 1920 depicts a Russian soldier who looks a lot like Putin. Another image, which is believed to have been taken in 1941, shows another Russian soldier who also looks a lot like Putin. People have been discussing the images for some time now and they come up with all sorts of ridiculous theories trying to explain them. Some believe that the almighty Russian president is, in fact, immortal, and others have come to say that man is a kind of different creature. Although they haven't really explained what they meant by a different creature. Others believe that the images are proof that Putin is a time traveler and that such people exist among us. For now, the conspiracy community seems to love the idea that all three images are actually the same person, and that Putin, the Russian president is immortal, and has served the Russian people for centuries. There are, of course, different and even more bizarre theories – yes, there are more bizarre theories out there – that connect the Russian president to Prince Vlad III of Transylvania, popularly known as Count Dracula. Sigh. Time Travel – for now – is out of the equation, because scientists have said that we cannot actually build a machine that allows us to manipulate space and time, giving us the ability to travel from one reality to another. And while conspiracy theorists have proven that explanations are many, no one seems to have – apparently – thought of another simpler explanation: Two Russians, living in Russia, who may share a common DNA, and look like their ancestors. It makes more sense than an immortal vampire who travels through time, right? After all, it is believed that everyone on earth has their own doppelganger somewhere out there. Maybe President Putin has a few more. Source)

Volcano eruption in Hawaii can cause mega-tsunami on the west coast of USA
Official proof of life on Mars can come within "few months"
Scientists have discovered how and when the sun will die, and it will be something epic!
Largest wave in the southern hemisphere is registered in New Zealand
Study suggests that aliens could be moving stars
Trump talks openly about creating space force: Is the disclosure of the secret space program near?
The largest amount of water in the solar system is not on Earth
Trump wants NASA to search for aliens – funding needs to be approved in Congress
Strange lights in the sky cause panic in Russia
The scale of the river to determine the importance of a possible alien signal
NASA will land on Mars Plain where UFO researchers found ' city ' and ' UFO ' ru...
How would humanity react if we actually found aliens?