It is ten times the size of the earth and, by finding itself 20 times farther from the sun than Neptune, it needs 10000 to 20000 years to complete its orbit.

His name, although provisional, is "Planet Nine", because it is nothing less than the ninth member of the Solar system. The problem is, no one's seen him. The Astro was first described two years ago in a research published in the scientific journal The Astronomical Journal and has since divided the scientific community. But the authors of the study, Michael Brown and Konstantin Batygin, both specialists of the prestigious Institute of Technology of California (Caltech), are accustomed to the controversy: they are also part of the team of researchers who have lowered Pluto to dwarf planet category. 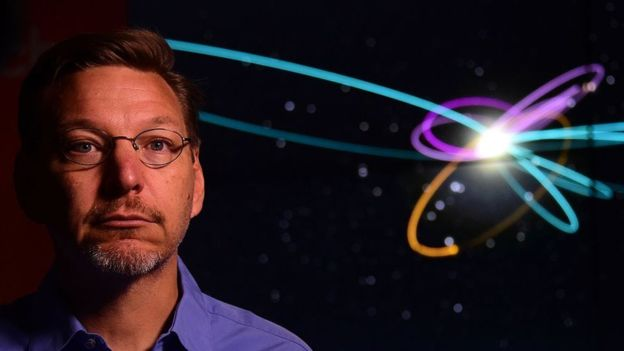 Right ImagemGETTY images Michael Brown said that ' incredibly ' no one has been able to prove that his hypothesis on the ninth integral of the Solar system is wrong although many scientists criticize the lack of definitive evidence about the existence of Planet Nine, the researchers prefer to focus on the half of the glass that is full. It's just that in all that time, no evidence has emerged to refute the planet's existence conclusively. "In the last 170 years, many have claimed to have discovered new planets and have always been wrong," Brown said to the Atlantic magazine last week. The astronomer said, "incredibly," no one has been able to prove that their calculations for the ninth planet are wrong. Batygin, in turn, shared in his Twitter account the article of the magazine, entitled "Planet Nine is real?" with the addition of the comment: "The short answer is: yes". It's that, according to scientists, it's harder to imagine the Solar system without this star than with it.

To describe the existence of this giant frozen planet, the researchers based mainly on indirect data, such as their supposed gravitational traits. In particular, they studied six objects located in the so-called Kuiper Belt, a region extending from Neptune's orbit to interstellar space. These icy bodies have elliptical orbits that point in the same direction, something that is so unlikely that it could only be explained by the presence of a body like planet Nine, according to Brown and Batygin in their original study.

In October, Batygin gave an interview to Nasa's news site, the American space Agency, in which he said: "At this time, there are five different lines of studies with observational evidence pointing to the existence of planet Nine." According to the astrophysicist, "If you decide to eliminate this explanation and imagine that the planet Nine does not exist, you would generate more problems than solutions. Suddenly you would have five different puzzles and you should have to develop five different theories to explain them. " Last month, Batygin himself published a study that would increase the evidence defended by him, in which he claims that the planet Nine even managed to change the direction of the orbit of distant objects of the Solar system.

In these two years, astronomers from different parts of the world have presented alternative explanations to the ninth planet. According to a project called "Outer Solar System Origins Survey" ("Research on origins beyond the Solar System"), for example, it discovered more than 800 new Neptunian objects (those that orbit the sun at an average distance higher than that of Neptune ), the distribution of these bodies is really random.

They even came to say that the data on which Brown and Batygin are based have errors caused by climatic factors-so all calculations would be biased. Christopher Smeenk, a science philosopher at the University of West Ontario, in the United States, went beyond. "Scientists are often good at developing conclusions by contrasts, Sherlock Holmes-style," he said to the Atlantic magazine. The famous detective, he added, was able to devise probabilities of guilt among a number of suspects.   Via BBC

The real reason why North Korea has ceased its nuclear tests
Hawaii volcano may be ready to explode, scientists say
Scientists have discovered how and when the sun will die, and it will be something epic!
Trump wants NASA to search for aliens – funding needs to be approved in Congress
The scale of the river to determine the importance of a possible alien signal
NASA finds system of "neighboring stars" faster in the universe
Astronomers discover 12 new moons of Jupiter
Brazilian physicists reveal new discernments about force that pushes and repels objects
The largest amount of water in the solar system is not on Earth
Severe solar storm will hit Earth on May 6th
The curious case of the immortal Putin
Trump talks openly about creating space force: Is the disclosure of the secret space program near?