Hawaii volcano may be ready to explode, scientists say
Skip to content
loading...
Como foi o crime e por que babá mentiu: o que a polícia apura no caso Henry
Uma condição cerebral misteriosa esta tornando os ursos amigáveis ​​e logo depois os matando
Cientistas afirmam ter identificado local exato de onde todos os humanos vieram
Bebê nasce com 3 pênis pela primeira vez na história registrada
Onça branca extremamente rara é flagrada pela primeira vez no Brasil
Pesquisadores encontraram uma maneira de regenerar dentes
Vídeo incrivelmente raro mostra o último sobrevivente de uma tribo amazônica nunca antes contatada
Lua cheia ajudou a ‘desentalar’ navio Ever Given no Canal de Suez
Churrasqueira solar atinge 230º e tem autonomia de 25 horas
[Vídeo assustador] Refinaria de petróleo explode em uma coluna gigantesca de fogo após ser atingida por raio
As can be seen in the report below FoxNews, the lava of the volcano boiler is rapidly dropping, which means that if it comes in contact with the water in the underground, the steam pressure generated by this contact may act as a pump, because it is Enclosed under the surface. Due to the fact that the explosion of this volcano could cause a mega-tsunami on the west coast of the United States, we are keeping the readers up to date on this possibility. See: Https://www.youtube.com/watch?v=KUWjJXbSEfs
A column of Ashes rises Wednesday (09) from the gazebo in the crater Halema ' a ' u, on the summit of the volcano Kilauea, in the National park of the Volcanoes of Hawaii, on the island of Hawaii. (US geological Survey via AP)

Geologists warned on Wednesday (09) that the Kilauea volcano in Hawaii could soon go through explosive eruptions on its summit and throw large rocks and ashes into the air. The threat of explosive activity will increase as the lava is drained from the summit of the Kilauea, one of the most active volcanoes in the world, and explosions are possible in the next few weeks if the lava falls below the surface of the groundwater, said the US geological Survey (USGS). 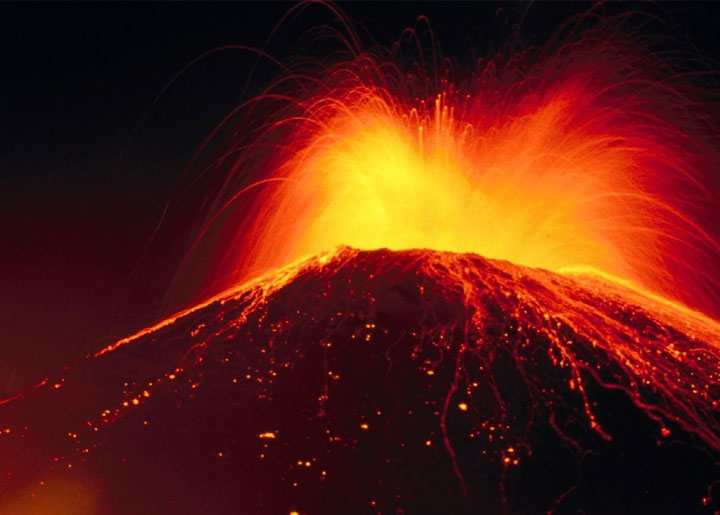 If the lava falls below the level of the groundwater, it could heat the water and create steam. Steam could accumulate pressure as the rocks fell and formed a dam within the walls of the volcano and ' cause steam blasts with ' very little warning ', said the Hawaiian Volcano Observatory (HVO) to the Honolulu Star-Advertiser. The volcano could then eject ' ballistic rocks ' from lava up to several meters in diameter, said the USGS. You can also send stones in the air several kilometers away. The HVO said to the Star-Advertiser:

The debris expelled during these explosions could impact the area around Halema ' a ʻ u. And the dome of the Kilauea.

There could also be potential for the emissions of ash and sulphur dioxide. Ash can cause eye irritation and respiration, reduce visibility and interfere with electrical lines, reported the Los Angeles Times. So far, the eruption has destroyed 36 structures since it began releasing lava from fissures that opened in a neighborhood of the Great island, about 40 miles east of the ridge crater. Through Leilani Estates and neighboring Lanipuna Gardens, they said Hawaii authorities. Separately, the Governor of Hawaii, David Ige, said the Puna power plant at geothermal Venture near the lava surge was accelerating the removal of the site of about 50,000 gallons of stored pentane, a flammable gas. It would be ' very, very dangerous ' if a volcanic fissure were opened under the facility where the fuel is stored, the governor said. He expected everything to be removed by Thursday. The explosive conditions resemble the eruption of the Kilauea in 1924, which killed a person and expelled stones, ashes and dust in the air for 17 days, said Tina Neal, scientist in charge of the USGS Hawaiian Volcanoes Observatory. No one lives in the immediate area of the crater. But people continued to visit the National Park of the Volcanoes of Hawaii, which includes the crater and the surrounding region. The park will be evacuated before the conditions worsen, authorities said. Almost 2,000 residents were ordered to evacuate the neighborhoods near the openings, but some ignored the order and continued to monitor their property. Authorities were door-to-door at Lanipuna to get people out of their homes on Tuesday. Source) Let's hope the volcano calms down without causing any further damage.

The real reason why North Korea has ceased its nuclear tests
Study suggests that aliens could be moving stars
Volcano eruption in Hawaii can cause mega-tsunami on the west coast of USA
NASA finds system of "neighboring stars" faster in the universe
The curious case of the immortal Putin
This asteroid should not be where astronomers found it.
Intelligent dinosaurs came out of the Earth millions of years ago
Amazing image shows the center of the Milky Way
Archons: The "extraterrestrial" race that dominates the earth, according to ancient texts
Severe solar storm will hit Earth on May 6th
The Enigma of the planet Nine, the new member of the Solar system that no one has ever seen
Five wrong conceptions about extraterrestrial life, according to science